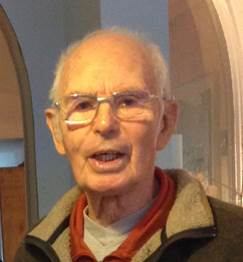 It was with great sadness that we heard of the death on Friday 13th October of Bryan Wardley, BEM.

Until he stood down two years ago, Bryan had been our treasurer, buildings manager, fundraiser and general guardian of the Institute for most of the previous 13 years. In 2016 he was awarded a British Empire Medal in the New Year Honours.

Bryan was arguably the single person who made the greatest impact in the community in the St Margaret’s area of north Oxford over the last 15 years. Thanks to his tireless dedication a threatened community centre was saved for the community and turned into a modern, highly-functional venue for a wide range of events and activities.

In the year 2000, the lease for the St Margaret’s Institute was due to expire and there was a real chance that the building would be repossessed and redeveloped by the landlord, St John’s College. Eventually the management committee negotiated a 999-year lease for £400,000.

Bryan, though retired from his job as an engineer at ICI, was tireless in raising this money from the community. He was the driver behind the 400 Club – an appeal to community members to pledge £1000 over three years – to which he managed to recruit around 100 members, many of whom remain loyal supporters of the Institute. He also made applications to grant-making bodies for funding both the renovation of the building and the purchase of the lease.

Bryan also used his engineering project-management skills to supervise renovations, including new flooring, lighting and the installation of solar panels on the roof. A Certificate from the Oxford Preservation Trust was awarded for the quality of the modernisation.

In 2008, the final instalment was paid to St John’s College and the future of the Institute as a highly-valued community centre was assured. Over 60% of the total was raised from the local community.

Bryan also personally organised a very popular high-quality annual Gardens Open event, co-ordinating up to a dozen local households including his own beautifully-kept Japanese-inspired garden, and the monthly Tea and Talks programme, where between 40 and 100 people come every month to hear a talk by a local expert midweek, especially for people who find it hard to get out in the evenings.

For thirteen years Bryan was also the building supervisor and general manager of the Institute, being happy to deal with enquiries from users at any time of the day and managing everything from a broken dishwasher to fitting LED bulbs to save energy, to replenishing cleaning materials and toilet rolls.

When he started to retire from active engagement in these activities, we found that we needed a long list of volunteers to replace him in all these different roles. 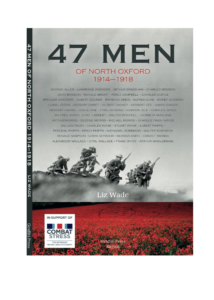 So quietly and modestly did he manage everything in the background that it will be only over the coming weeks and months that we will fully realise quite what an important pillar he has been for so long of the edifice that is the local community. He leaves a very large gap in the community and will be much missed.

Project to help older people in central north Oxford
A booklet has been compiled listing all the activities available for older people in the local area. It is part of a project which is a collaboration between St Margaret's Institute, St Margaret's Church and AgeUK. Click here to see a copy of the booklet.

War memorial book published
47 Men of North Oxford, Liz Wade's book about the First World War, is now available. It tells the histories of 47 men commemorated on the St Margaret's War Memorial, set in the context of the First World War. Every one of them had a connection with this small part of North Oxford, though they died as far apart as Flanders and Iraq. Their stories are a microcosm of all those who gave their lives.

All profits go to Combat Stress, the charity which provides help to armed services' veterans who have mental health problems. The book is available from Liz Wade at 28 Polstead Road (01865 556301/07984 602723) at £6 plus postage and packing for non-local deliveries.

In 1999, when Ben took over the chairmanship of the committee, St Margaret's was at a turning point. Its glory days as a working men's institute and as a dance hall for World War Two servicemen were over. It had become a rather dilapidated venue for 'jazz and jumble sales'. The hundred year lease, and twelve year extension, from St John's College was due to expire. St John’s were now seeking a commercial lease, the cost of which would prohibit the Institute from continuing as a community centre.

Into this depressed situation came Ben Simpson. With the support of a new committee, he set about raising awareness of the value of the centre not only to local people but also to the wider community. He was heavily involved in negotiating a new and beneficial lease from the College.

An Appeal was then launched which raised £400,000 from individuals and funding bodies to buy the lease, and £160,000 for renovation. The final payment on the new lease was made to the College before the due date, in March 2008.

Ben has continued to steer the Management Committee through the calmer waters of the last five years, and to build on the co-operation between college, community and City Council pioneered during the lease negotiations. St Margaret's Institute is now a thriving community centre with a secure future, which is proud to offer support to other community projects.

Ben’s experience, tact and diplomacy have been major factors in this success, and we thank him warmly.

Ben was appointed MBE in the New Year's Honours List of 2010.